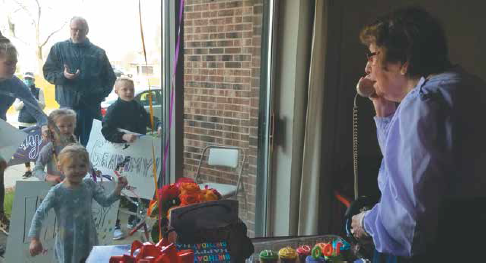 Window visits by family members were one way Alexian Village has tried to keep residents engaged during the coronavirus pandemic. (Submitted photo)

Alexian Village is a 60-acre senior living facility that offers three choices for those in need of continuing retirement care, including independent living, assisted living, rehabilitation, and long-term skilled nursing.


When the COVID-19 pandemic came crashing into Wisconsin in March, leadership at Ascension Living Alexian Village implemented a plan of action. Between daily meetings on campus, and weekly calls with national counterparts, the nearly overwhelming amount of information that came out during the first weeks of the statewide shutdown, the leadership team at Alexian Village made it their goal to make every resident feel engaged and connected despite the pandemic that brought so much uncertainty and fear.


One of their first moves was to take all of the activities and meals directly to the residents in their apartments instead of having them go to a central location. They knew they had to find meaningful ways to communicate with their residents who weren’t quarantined to their apartments but who were encouraged to stay socially distant from one another. The team put together an email distribution list so they could get information to residents and their loved ones as quickly as possible, with every member of the administrative team constantly checking the email account to respond to any questions or concerns.


They began a weekly meeting on their closed-circuit TV system to give updates to their independent living residents, and used a Google platform so they could write in their questions to Lina Ganiere, the director of residence services, who was able to respond live.

“We couldn’t have that face-to-face meeting,” she said. “But I think that regular flow of communication went a long way for the residents and their families; they were well aware of what was going on and what we were doing.”


Paige Bailey, the social and volunteer coordinator at Alexian Village, got creative with the use of Alexian’s closed circuit TV, and organized a wine and paint night where residents had supplies delivered to their apartments and watched the instructions through the in house channel. They arranged Zoom calls for some of the performers and speakers that were scheduled to come in and do presentations, along with exercise classes, and bingo. To help any residents who might be suddenly overwhelmed at the idea of navigating so much technology, they also offered resources to help them learn how to find podcasts, or use Alexa, and the various free streaming services offered.


Ganiere and Bailey were responsible for helping residents remain active and engaged with each other at Alexian Village, as well as connected to their loved ones through virtual visits. Using a variety of platforms depending on what worked best for the family and the residents, they offered virtual visits on the computer, and window visits, where families gathered outside designated apartments and residents sat close by on the other side of the glass, where they could see one another and talk on the phone. As the weeks wore on and spirits sank, Bailey had an idea to arrange a family car parade to bring families closer together. About 30 cars lined up, decorated with signs, streamers, and balloons, and residents stood in their windows waving, or waited outside a safe distance apart to smile and blow kisses to their loved ones as they passed by.


During the lockdown, many residents celebrated their birthdays with family close by but socially distant, including a resident who turned 99, raising a champagne flute filled with a mimosa to her window. On the other side, her whole family surprised her and gathered to sing her songs and say cheers to her on a life well lived. “This is so great,” she told Bailey later that day. “It’s been my best birthday yet.”


Jessi Smedal, the chaplain and mission director, said it was important to their team to keep a sense of normalcy and help residents adjust. “We all have the sense of service, heart, and attitude,” she said. “We want to be there for our residents the way their families can’t be at this time, and if we can get them a little closer to one another, we will.”


A few weeks ago, a resident in independent living wanted to arrange a birthday celebration for her husband, who lives separately from her in Alexian’s assisted living facility. Unable to see one another because of visitor restrictions, she approached Alexian to ask for help. Together, they orchestrated having all of their children and many of their grandchildren and great grandchildren surprise him by calling in a video chat. He was so touched he cried, something his wife said she’d rarely seen him do.


“It was so impactful for them to be as close together as they could be that day,” Paige Bailey said. “That was our hope when all this began, to keep families close and our residents uplifted.”